by Brown Acid "The Sixth Trip" 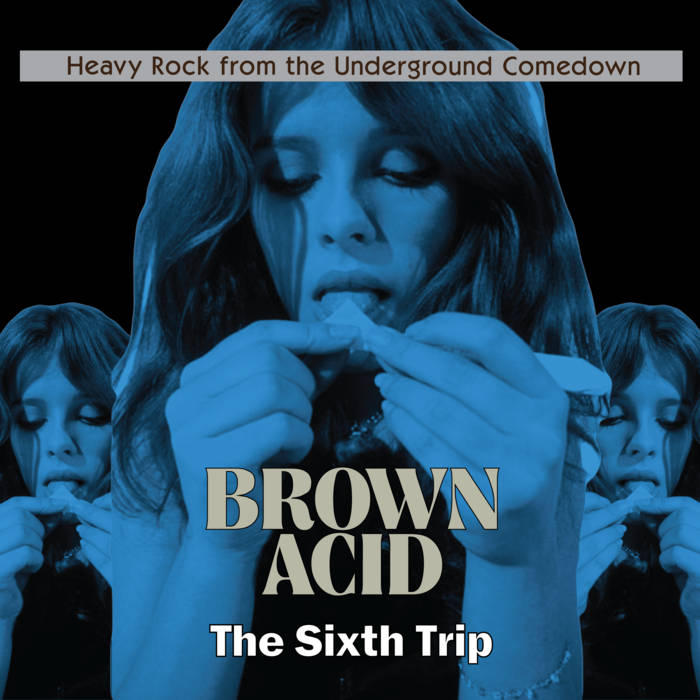 paul rote If you have the other five trips you are hooked . You are an acid freak ! Enjoy this sixth trip Favorite track: Truth & Janey - Midnight Horsemen.

If you’d told us when we started this epic journey that we’d have six volumes worth of licensed tracks released in just three years, we would’ve laughed in your face! Doing the Dark Lord’s work isn’t an easy job, but somebody’s gotta do it, so here we are with six Trips under our belt and more lined up. You heads just can’t get enough obscure hard rock, heavy psych, and proto-metal from the late-60s & 70s! And for that, we’re grateful for the opportunity to keep laying these slabs in your lap.
This isn’t just a random mixtape we threw together off the Internet. We find the records, track the bands and transfer the tapes, so you don’t have to. The bands did their job back in the day by writing, recording and releasing this material, most times against all odds, and you’ve squandered your hard earned scratch on this record, so I guess the least we can do is continue to compile quality Rock’n’Roll cuts from the golden age of heaviness.

This time around we have 10 deep cuts from across the continental US of A and one from our neighbors up North. This Trip kicks off with an outrageous number from Gold out of San Francisco circa 1970. The band used to open their sets with this over-the-top frantic jammer which is absolutely mind-blowing and also leads one to believe that the only band that could’ve held a candle to Gold back in the day would’ve been the mighty Blue Cheer.

As we delve deeper into the depths, Canadians continue to prove that they could bang heads with the best of ‘em! Heat Exchange from Toronto released the rollicking ripper “Inferno” on the Yorkville label way back in 1968 and it’s still thumping almost 50 years later!
Missouri isn’t a state that brought us a lot of heavy 45s, but there are a handful of outstanding tracks from the Show Me State, one of which is the funk-laced anthem “Give Me Time” by Backwood Memory from Kansas City. Speaking of Show Me, many thanks to our KC pal Jeffrey Harvey for turning us on to this one and helping put us in touch with the band.
The longer we do this, the more we begin to believe that Youngstown, Ohio was the Hard Rock Mecca back in the day. Travis is yet another Youngstown group that aimed to get asses out of seats and out in the streets. “Lovin’ You” is a groovy banger with a sultry riff originally released on the prolific Starshine Productions imprint.

Six years prior to his Arcadian synth-funk novelty hit “Space Invaders” from 1980, Victor “Uncle Vic” Blecman took Flight into the studio with a list of relationship requirements. Amongst which are his need for “Luvin’, Huggin’, & More”, with emphasis on the “More” part if we’re to believe the urgency with which he delivers this fist-pumper.

If you don’t immediately recognize the Truth & Janey moniker, you need to get with it and familiarize yourself with their incredible 1976 LP “No Rest For The Wicked”. It’s a proto- metal masterpiece that’s been reissued on Rockadrome. Released four years earlier than their debut LP, “Midnight Horseman” is a 45-only track backed with a cover of “Under My Thumb”. Dennis Bergeron from Rockadrome was crucial in helping us obtain the rights to this Iowa burner.

Another Iowan group, West Minist’r, self-released three 45s between 1969 and 1975. They’re all great in their own way, but “My Life” hit the crunchy sweet spot in ’71 with vocals sounding like a fresh from primal scream therapy John Lennon over a zonked-out Hendrix groove. You can count on hearing more from West Minist’r on future Trips.

It’s nearly impossible that Dayton, Ohio’s Purgatory didn’t seize the “Strange Days” and join “The Soft Parade” while “Waiting for the Sun”. And although “Polar Expedition” wears its influences on its sleeve, 1969 would have been at least a little worse off if the band hadn’t self released this single.

Johnny Barnes was definitely “smokin’ that reefer” and “drinkin’ that wine” when he released “Steel Rail Blues” in 1976. The label states that you could order a copy of this 45 for by sending $1 to a PO Box in Boston and it’s the only record on the Brown Acid series that seems to be obtainable currently for about the same amount it was sold for over three decades ago. That said, it’s doubtful that it will remain so cheap for much longer.
With a track as heavy as “Is There No Peace” it’s easy to let the name of the label on this 45 slide. In Chicago in 1970 PSLHRTZ seemed like as good a label name as any for the guys in Zendik to release this insane recording on. Halfway through the track you might be wondering to yourself, “How was this not a hit?”, and then you hear the lyrics to the last bit of the song and understand. Thank Christ for Zendik, even if he is dead.

Well, there ya have it. Months worth of record digging and detective work for about 40 minutes worth of music. Some people might think this is a waste of time, but we don’t and we hope you don’t either. This is the stuff that makes life worth living, at least until the next Trip...

Bandcamp Daily  your guide to the world of Bandcamp