by Brown Acid - The First Trip 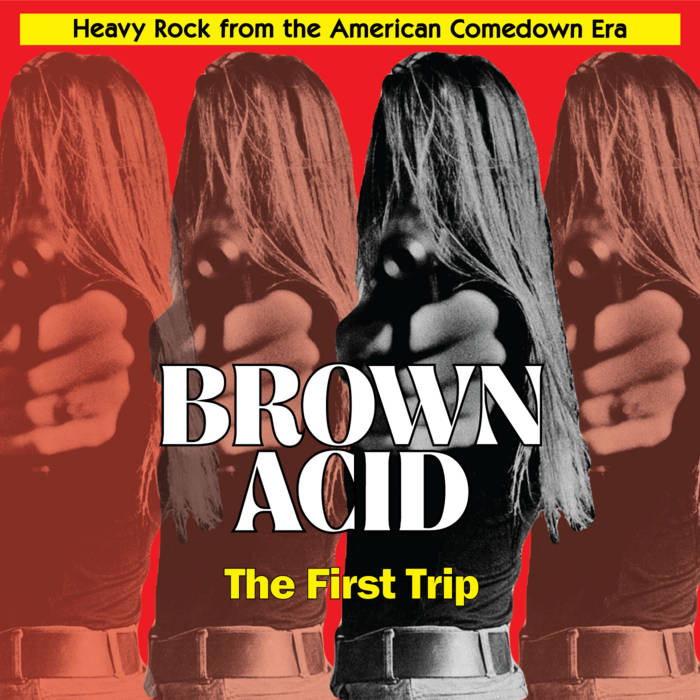 Out of Step Music Hour

Some of the best thrills of the Internet music revolution is the ability to find extremely rare music with great ease. But even with such vast archives to draw from, quite a lot of great songs have gone undiscovered for nearly half a decade, particularly in genres that lacked hifalutin arty pretense. Previously, only the most extremely dedicated and passionate record collectors had the stamina and prowess to hunt down long forgotten wonders in dusty record bins — often hoarding them in private collections, or selling at ridiculous collector’s prices. Legendary compilations like Nuggets, Pebbles, ad nauseum, have exhausted the mines of early garage rock and proto-punk, keeping alive a large cross-section of underground ephemera. However, few have delved into and expertly archived the wealth of proto-metal, pre-stoner rock tracks of Brown Acid: The First Trip.

Lance Barresi, co-owner of L.A.-cum-Chicago shop Permanent Records has shown incredible persistence in tracking down a stellar collection of rare singles from the 60s and 70s for the 11-track compilation. Partnered with Daniel Hall of RidingEasy Records, the two have assembled a selection of songs that’s hard to believe have remained unheard for so long.

"I essentially go through Hell and high water just to find these records,” Barresi says. “Once I find a record worthy of tracking, I begin the (sometimes) extremely arduous process of contacting the band members and encouraging them to take part. Daniel and I agree that licensing all the tracks we're using for Brown Acid is best for everyone involved.” Rather than simply bootlegging the tracks, when all of the bands and labels haven’t existed for 30-40 years or more, tracking down the creators gives all of these tunes a real second chance at success.

“ All of (these songs) could've been huge given the right circumstances,” says Barresi. “But for one reason or another most of these songs fell flat and were forgotten. However, time has been kind in my opinion and I think these songs are as good now or better than they ever were."

Raw Meat, for example, one of the stomping standouts from the compilation, is a band about which precious little is known even by the owner of the label and producer of the band’s original 1969 single, Richard Paul Thomas — two of its tracks reissued as a 7” teaser single for the compilation on July 14th, 2015 via RidingEasy Records. The trio was from north of Milwaukee, WI, but not much more information remains available. “They were one of the tightest trios around at the time and had a fairly large repertoire of their own material,” the label owner says (name?). “The only thing that sticks in my mind was the band’s bumper sticker ‘Raw Meat Is Good For You’. Our offices were on Lincoln Avenue just next door to the Federal Meat inspectors offices.”

Brown Acid: The First Trip opens with the slithering buzzsaw guitars and hard-rock howl of Zeke’s’ “Box”, a monster that gives Blue Cheer a run for their leaden blues. Snow sways into “Sunflower” with a touch of Steppenwolf’s swagger and wind-in-their-hair wildness. Elsewhere, Zebra proves they were “Wasted” with a soul-inflected groove, while Bob Goodsite leans in on his wah-wah and phaser pedals, determined to out-Hendrix Jimi himself on “Faze.” Raw Meat’s “Stand By Girl” serves up a fierce, stomping riff intercut with Iron Butterfly style operatics. Bacchus kicks out a hostile sounding boogie, demanding to “Carry My Load.” Josefus caps it all off nicely with a hooky power-pop meets Bob Seger System meets Lollipop Shoppe anthem with the undeniably catchy chorus, “hard luck — keep truckin’!”

It’s a solid set of unknown hits you can’t believe failed to connect back in their heyday due to various unfortunate circumstances. But now in 2015, Brown Acid: The First Trip gives these long-lost gems their well deserved moment to shine.

Bandcamp Daily  your guide to the world of Bandcamp